Lifelong learning (LL) is a continuous learning process. At any point in time, the learner has performed a sequence of $N$ learning tasks, $T _ { 1 } , T _ { 2 } , \ldots , T _ { N }$. These tasks have their corresponding datasets $D _ { 1 } , D _ { 2 } , \ldots , D _ { N }$. The tasks can be of different types and from different domains. When faced with the ($N+1$)th task $T _ {N+1}$ (the new or current task) with its data $D _ {N+1}$, the learner can leverage the past knowledge in the knowledge base (KB) to help learn $T _ {N+1}$. The task may be given or discovered by the system itself. The objective of LL is usually to optimize the performance of the new task $T _ {N+1}$, but it can optimize any task by treating the rest of the tasks as the previous tasks. KB maintains the knowledge learned and accumulated from learning the previous tasks. After the completion of learning $T _ {N+1}$, KB is updated with the knowledge gained from learning $T _ {N+1}$. The updating can involve consistency checking, reasoning, and meta-mining of higher-level knowledge. Ideally, an LL learner should also be able to:

Knowledge Base (KB): It is mainly for storing the previously learned knowledge. It has a few sub-components.

Knowledge-Based Learner (KBL): For LL, it is necessary for the learner to be able to use prior knowledge in learning. We call such a learner a knowledge-based learner, which can leverage the knowledge in the KB to learn the new task. This component may have two sub-components:

Task-based Knowledge Miner (TKM): This module mines knowledge from the KB speciﬁcally for the new task.

Application: This is the real-world application for the model. It is important to note that during model application, the system can still learn new knowledge, and possibly discover new tasks to be learned. Application can also give feedback to the knowledge-based learner for model improvement.

Task Manager (TM): It receives and manages the tasks that arrive in the system, handles the task shift, and presents the new learning task to the KBL in a lifelong manner. 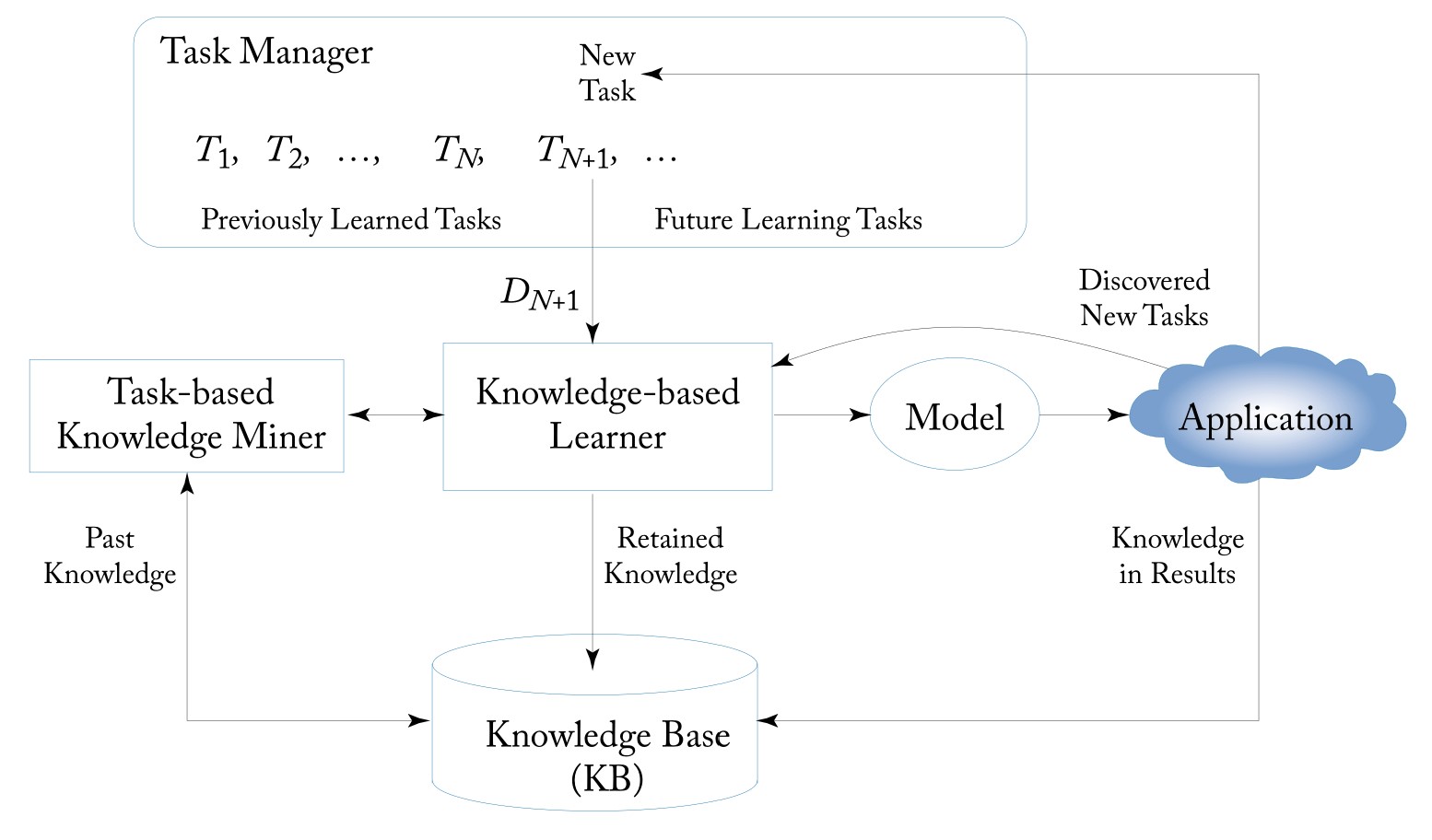 Lifelong Learning Process: A typical LL process starts with the Task Manager assigning a new task to the KBL (the task can be given or discovered automatically). KBL then works with the help of the past knowledge stored in the KB to produce an output model for the user and also send the information or knowledge that needs to be retained for future use to the KB. In the application process, the system may also discover new tasks and learn while working (learn on the job). Some knowledge gained in applications can also be retained to help future learning.

There is still no well-accepted definition of knowledge or its general representation scheme. In the current LL research, past knowledge usually serves as some kind of prior information (e.g., prior model parameters or prior probabilities) for the new task. For a particular LL algorithm and a particular form of shared knowledge, one needs to design a KB and its maintenance or updating methods based on the algorithm and its knowledge representation need. There are mainly two types of shared knowledge that are used in learning the new task.

LL methods based on local knowledge usually focus on optimizing the current task performance with the help of past knowledge. They can also be used to improve the performance of any previous task by treating that task as the new/current task. The main advantage of these methods is their flexibility as they can choose whatever pieces of past knowledge that are useful to the new task. The main advantage of LL methods based on global knowledge is that they often approximate optimality on all tasks, including the previous and the current ones. This property is inherited from MTL. However, when the tasks are highly diverse and/or numerous, this can be difficult.

There are two other fundamental challenges about knowledge in LL:

Experimental evaluation of an LL algorithm in the current research is commonly done using the following steps:

There are several additional considerations in carrying out an LL experimental evaluation.

Role of Big Data in LL Evaluation: It is important for an LL system to learn from a diverse range and a large number of domains to give the system a wide vocabulary and a wide range of knowledge so that it can help learn in diverse future domains. Furthermore, unlike transfer learning, LL needs to automatically identify the pieces of past knowledge that it can use, and not every past task/domain is useful to the current task. LL experiments and evaluation thus require data from a large number of domains or tasks and consequently large volumes of data.

Learning a new representation for LL:

Thrun proposed to learn a new representation to bridge the gap among tasks for the above two memory-based methods to achieve LL, which was shown to improve the predictive performance especially when the number of labeled examples is small.

To bridge the difference among different tasks and to be able to exploit the shared information in the past data (the support set), the paper proposed to learn a new representation of the data, i.e., to learn a space transformation function $g : I \rightarrow I ^ { \prime }$ to map the original input feature vectors in $I$ to a new space $I ^ { \prime }$. The new space $I ^ { \prime }$ then serves as the input space for KNN or the Shepard’s method. The intuition is that positive examples of a concept (with $y=1$) should have similar new representations while a positive example and a negative example of a concept ($y=1$ and $y=0$) should have very different representations. This idea can be formulated as an energy function $E$ for $g$:

MTL Net: In MTL net, instead of building a neural network for each individual task, it constructs a universal neural network for all the tasks. This universal neural network uses the same input layer for input from all tasks and uses one output unit for each task (or class in this case). There is also a shared hidden layer in MTL net that is trained in parallel using Back-Propagation on all the tasks to minimize the error on all the tasks. This shared layer allows features developed for one task to be used by other tasks. For a specific task, it will activate some hidden units that are related to it while making the weights of the other irrelevant hidden units small. Essentially, like a normal batch MTL method, the system jointly optimizes the classification of all the past/previous and the current/new tasks. 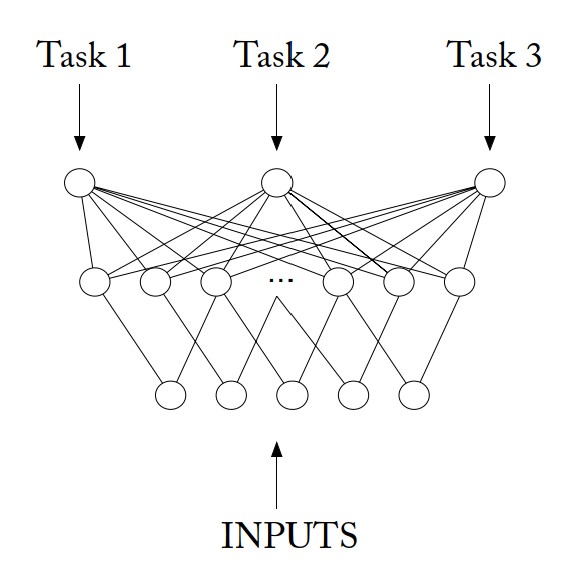 Lifelong EBNN: EBNN (Explanation-Based Neural Network) is used for concept learning, which learns a function $f : I \rightarrow { 0,1 }$ to predict if an object represented by a feature vector $x \in I$ belongs to a concept ($y=1$) or not($y=0$).

Again, the knowledge base in EBNN stores only the past data. Similarly, this technique also does not deal with correctness or applicability of the shared knowledge $d$. It is also inefficient if the number of previous tasks is large because the training of the distance function d needs to be re-done using all the past data whenever a new task arrives. Additionally,since every pair of data points in each past task dataset forms a training example for learning the distance function d , the training data for learning $d$ can be huge.